With Microchip Technology Inc.’s PolarFire SoC field programmable gate array (FPGA) at its heart, providing a deterministic, coherent 64-bit RISC-V CPU cluster and a deterministic L2 memory subsystem enabling the implementation of secure Linux and real-time applications, PolarBerry is ideally suited to the development of
embedded computing and real-time applications based on RISC-V processors as an alternative to ARM. Typical applications will be found in the defence/mil-aero, AI/ML, communications, automotive, industrial automation and imaging markets as well as the Internet of Things.

The PolarBerry SoM offers all the important attributes for strong SoC/FPGA design security including anti-cloning protection, device-level anti-tamper features, bitstream protection, key management, FPGA hardware access control, secure boot and physical memory protection (PMP) as well as supply chain assurance. It also features a 40 pin Raspberry Pi (RPI) interface to allow standalone operation and rapid application development by providing up to 26 GPIOs, 20 of which can be assigned to SPI, UART, CAN or other interfaces. All RPI signals are 3.3V logic. Associated onboard PolarBerry SoM peripherals include 4GB of 32-bit wide DDR4 memory, 128MB SPI Serial NOR FLASH for storing the boot image and programmable clocks to provide flexible clocking to the FPGA and high-speed transceivers. There is also an RJ45 Ethernet socket with 100/1000Base-T interface, two CAN 2.0 physical layers, a JTAG interface for programming and 4GB of eMMC non-volatile storage. Samtec connectors provide high-speed communication to a carrier board for powerful peripheral customization. The power consumption of the module is 16W with power in can be applied via PRI interface or carrier board.

The PolarBerry SoM measures just 55mm by 85mm and has an operational temperature range of 0°C and +70°C. It can also be installed on Sundance’s PCIe SoM carrier to provide access to an FMC and additional interfaces.

PolarBerry utilizes the PolarFire FPGA fabic and RISC-V processors to provide high levels of security for real-time applications. It features advanced code and bitstream security and anti-tamper engines. These measures give PolarBerry previously unheard-of, defense-level security for an SBC/SoM.

PolarBerry offers all the important attributes for a strong SoC FPGA design security: 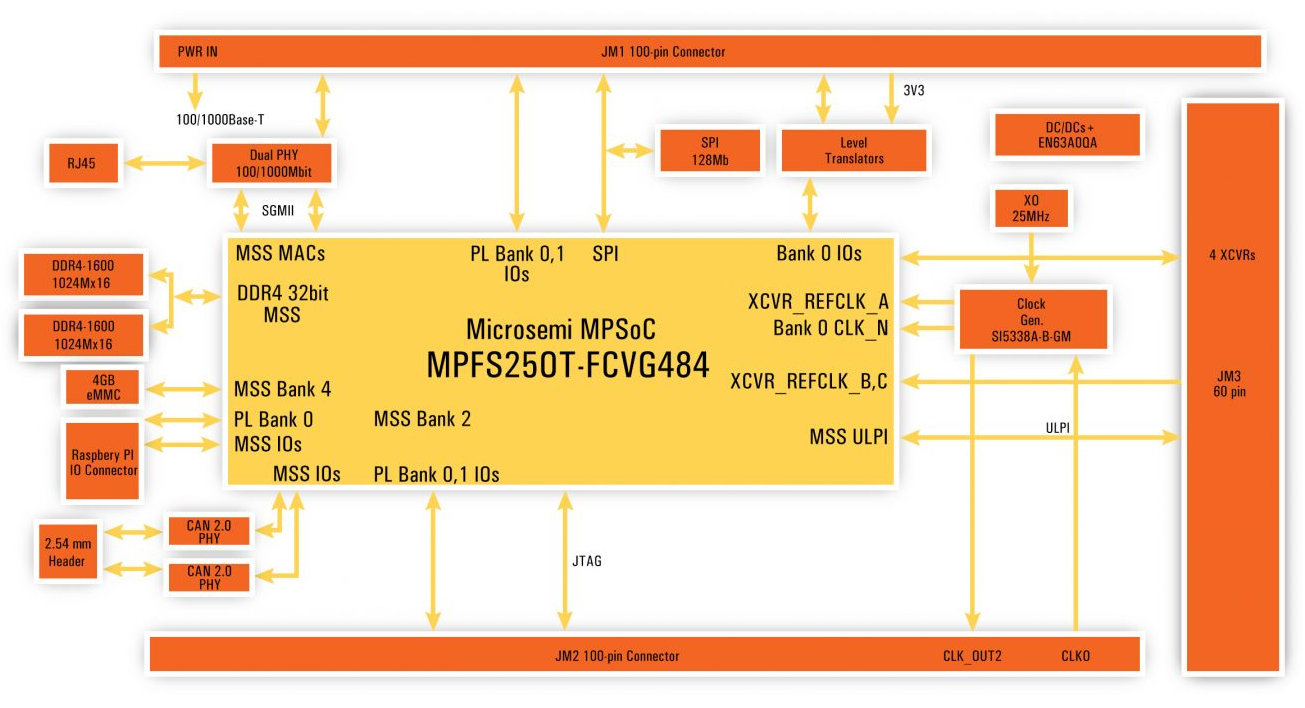 SundanceDSP is part of the Microsemi Mi-V ecosystem, which brings together tools and vendors tailored for the PolarFire SoC, including:

The Microsemi Mi-V ecosystem brings together tools and vendors tailored for the PolarFire SoC, including:

Developing on the PolarBerry kit requires a Libero Silver license, which is free of charge and valid for one year. Once that license has expired, you will be able to generate a new license each year for free